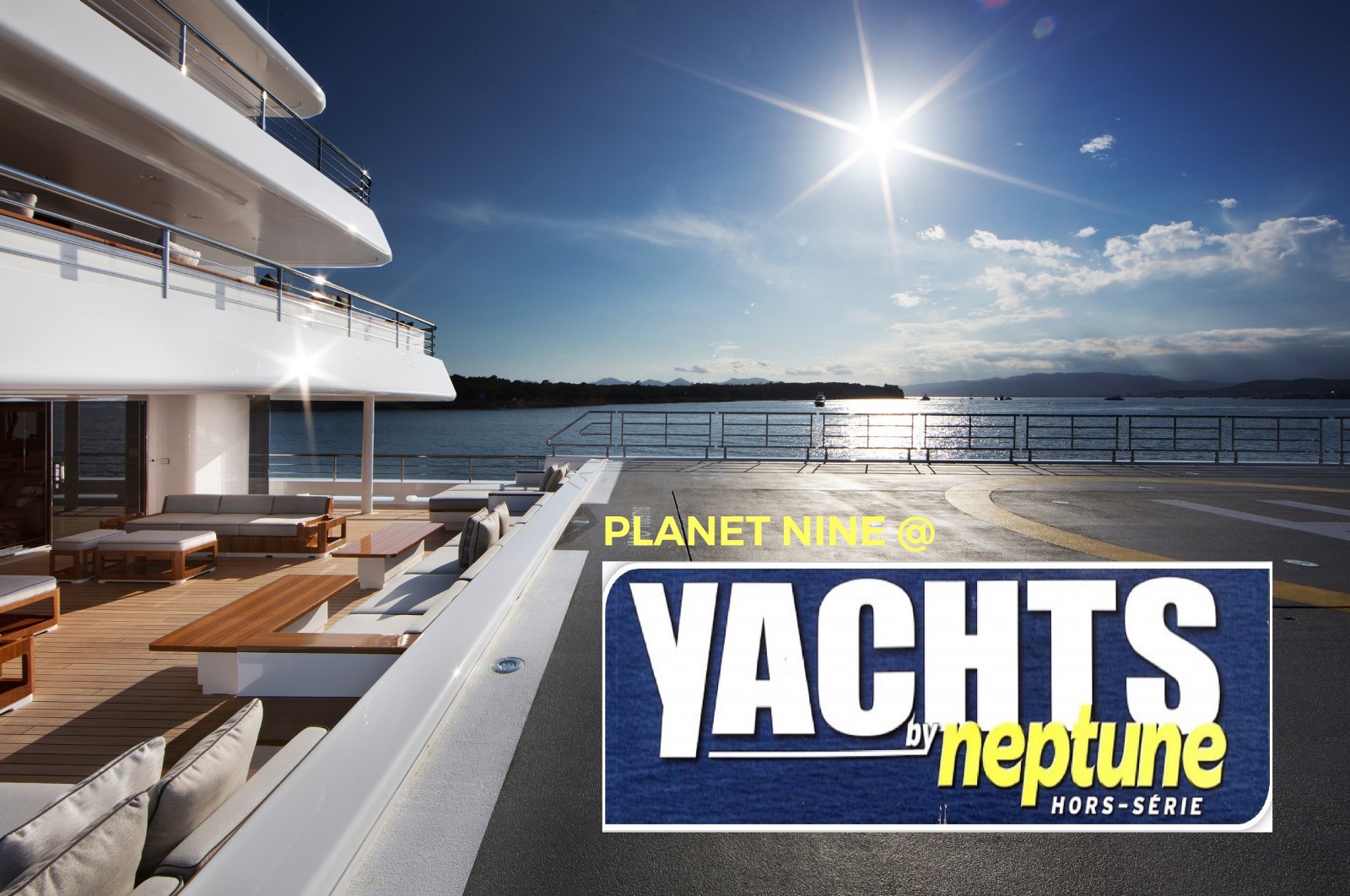 For the original article in French, pls check out the link.

The owner of Planet Nine had toyed with the idea of building a global exploration yacht for over ten years. A knowledgeable yachtsman, he anticipated the current interest in adventure and off-the beaten track cruising well ahead of the market. Launched in May 2018, Planet Nine has appeared just at the right time and with inimitable style.

Indeed, to call her an exploration yacht is slightly misleading. Planet Nine isn’t a conversion or a work-boat. Her streamlined profile, from the pen of the talented Tim Heywood, is reminiscent of a beefy military vessel with the same air of capability, solidity and power.

The owner, who was very much involved in the design and construction, focused as much on long-term voyages in extreme conditions as on traditional summer cruising. Serious, go-anywhere sea keeping characteristics were essential.  Planet Nine can deal with sea ice up to 15 centimetres thick thanks to her thick-plated and densely ribbed hull.  The hull and superstructure were built by the commercial shipyard Cantieri San Marco in La Spezia. She was then towed down the coast to The Italian Sea Group’s yard in Marina di Carrara for completion to luxury yacht standards. Planet Nine is the largest yacht the yard has built. “The result is excellent,” says The Italian Sea Group’s vice-president Giuseppe Taranto: “the specification was very tough and the client demanding but we are confident Planet Nine will be a benchmark for future projects”.

Planet Nine took over 30 months to finish and incorporates some very unique features. Ice classed 1D by Lloyd’s, her seawater intakes are protected from ice and low temperatures. She is equipped with dynamic positioning, essential for global cruising in sensitive areas, and zero speed stabilizers for comfort at anchor.
She has a commercially approved helideck designed with a lifting platform and an enclosed below-deck hangar suitable for an Augusta Grand or similarly dimensioned helicopter up to 8 tons in weight. The heli hangar includes a refuelling facility with storage for 9000 liters of fuel.
This means Planet Nine can handle two aircraft at the same time. One on deck and another stowed in the hangar which enables the yacht to operate a heliport and handle incoming flights even when the owner is on board.
“She is unusually versatile and can handle even the most complex logistic operations,” says Stuart Larsen from Fraser Yachts who represents Planet Nine for sale. “The layout has been well-thought out and is functional both in hot and cold weather conditions”.
The interior layout is as purposeful as the exterior. Although the superstructure is relatively small relative to her 2100 gross tons and 13m beam, the layout makes use of every inch of space.

Five of the eight guest staterooms are located on the Lower Deck, under the helideck. The engine room and the technical areas have been moved below the waterline to the what is usually known as the Tank Deck. Noise levels have also benefited from this arrangement.
The interior was designed by Tino Zervudachi of the London-based studio Mlinaric, Henry and Zervudachi. The design and decoration are as much a response to the context as to the way the owner wishes to live life on board. Particular emphasis was placed on the use of colour and comfort. The yacht is elegant with stylistic flair yet has a cosy quality and does not feel over-designed.

Since she was built for extreme, long-distance cruising – she can cruise for 6,000 miles at 14 knots and a staggering 10,000 miles at 10 knots – business requirements have not been overlooked. A large meeting room/library with adjoining lounge is located on the Main Deck and there is a smaller private study on the Upper Deck.
The Upper Deck houses the main indoor living area. There is a stunning Inside-Outside salon, an Observation Lounge forward and a super-surround cinema with lounge beds.

Guest accommodation is spacious (sleeping 16 max) and well lit. In addition to the five guest staterooms on the Lower Deck with direct access to the Beach Club, two staterooms are located on the Main Deck, the full-beam Owner’s suite and a VIP, while another VIP, with a private outside area, is on the Bridge Deck. An elevator serves all decks from the Lower to the Sun Deck. There is also a dedicated crew elevator. Planet Nine can carry 20 crew.
© STUART LARSEN 2020 &